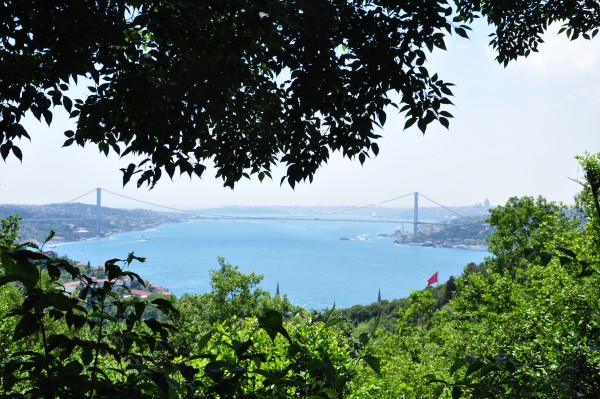 During 28-30 May 2015, a group of thinkers came together in a rather spontaneous meet up. A mixed group of annotation enthusiasts and curious met up at TETAM (elecommunications and Informatics Technologies Research Center) at Bogazici University, Istanbul, Turkey. A quiet campus surrounded by many old trees and a view of the Bosphorus - perfect for a retreat. Can't say how much the location had to do with a solid 2.5 day participation we all enjoyed and appreciated.

It was a busy 2.5 days indeed. During the workshop the concept of annotations, web annotations, and use cases were discussed. PhD and MS students whose work is related to annotations made some presentations. As usual, seeing triggers insights and understanding. The Twitter annotation model of Onur and the re-narration work of Emrah were considered as turning point for several participants.

A view of people at work! 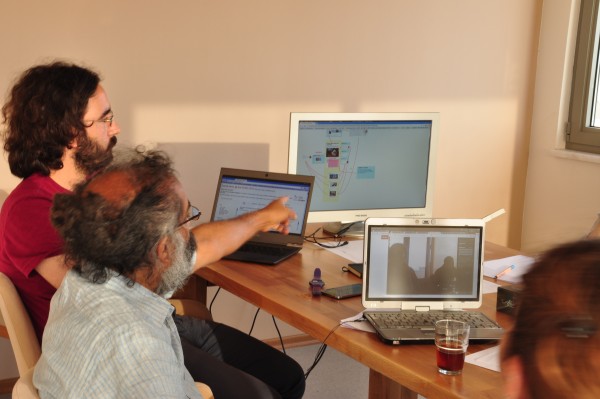 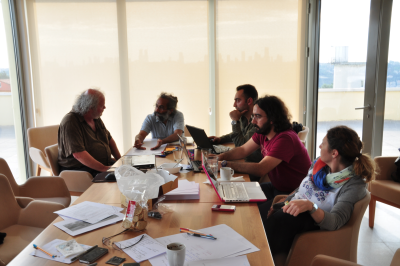 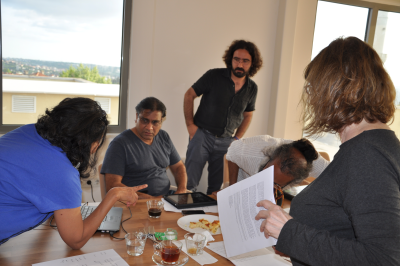 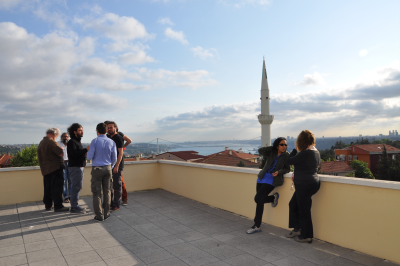 Kavita is part of an ongoing global self-organized research community that regularly discusses impact of technology on communities. To support their work, this group (Labor Tech) relies on digital tools to communicate about issues by finding, reading, and annotating documents. Their group behaviour naturally has and does heavily involve annotation as a scholarly activity. Alas, the tools that support communication and annotation do not satisfy this community, for all the reasons that are often mentioned: lack of interoperability and search are the major ones.

Two people (Stephanie Steinhardt and Winifred Poster) from Labor Tech participated remotely and explained their issues. This group has also clearly articulated the desire to support and take part as a user group to provide feedback in use cases and design as needed. Suzan has since participated in one of their meetings and is keen on pursuing this real use case that has immense need for annotation support. Their needs are not peculiar to their community and would readily extend to any online community who is working in any area.

During the workshop Anil was engrossed and then came to some great insights, which is definitely a good read. How wonderful to have a great narrator who understands computer science. How he left computer science after many years to become a writer is a great story itself. Reading his reflection on understanding annotation is worthwhile!

Like many wise people, after years of labour and life experience, Lambert has been very reflective about computing and humanity. The [Web We Want] initiative and similar contemplations are getting more and more attention.

Here is Lambert's call for a movement:

Another Website is Possible with pointer to Our Movement

Aslı -- a keen observer and articulator -- soaked in much more than the spoken words and made many observations that she shared in pivotal moments.

She compiled some e-words (as she put it). No, not the geeky e-words... On her list were words like essence. "Essence... Of you sitting there, listening, absorbing, pondering, stirring things up, articulating, ... It felt really good. I really appreciated and enjoyed the essence of your presence."

The more I imagine the almost infinite number of possibilities of creating/curating/remaking... in indefinite number of ways/styles/methods/perspectives..., the more Anotat-İST becomes a re-story ever accessed and re-narrated. You may want to check this out.

Fulya is another multi-dimensional character and had many contributions.

Education Design and Annotation is her view about how annotation could be used in education. Much of the digital content can be useful from any number of perspectives and characteristics, for which annotation would be most useful.

Dinesh-vari (those you know Dinesh, know he has his own way of saying and doing things). These are his notes:

Re-story was an ongoing theme on Dinesh's mind. Those who understood should tell others. As someone who knows Dinesh for a long time, I know he is usually on to something, even though it usually takes me an awfully long time to get it!

Here is what he says:

How to explain restory... hmm..

Imagine someone who is SWeeTing (annotating) the Web for a while, say using swtr.us. Lets say the repository of these SWeeTs, is accessed through dash.swtr.us.

For one who is reading the article, this note may not bring about the intended clarity regarding the history of annotation. However, there may be other notes in their own context that might be better in the context. Now imagine that a more contextual note from dash.swtr.us is shown instead - thereby contextualizing the article for the reader. We call this the restory.

These tidbits that are useful in a story, maybe better refered to as notelets. What do you think of notelet as the other word for annotation. A notelet is folded and thus can be open by who all is allowed to open it and such other attributes are possible. A SWeeT is a semantic web tweet, a notelet is the intended annotation, a note is its manifestation in the context of the article.

Check out [Read Fold] as an interesting related tool. Here is an article about it: Journalism + Annotation = ❤️️

Simon contributes a brief summary of the 'Leuphana Annotation' workshop and a note on the 'Bureau for Book Liberation' prototyping project.

[also we need to put up scans of the paper annotations]